What is Stop The Violence?

Over three weeks (Nov 3-20) we are examining issues that have made headlines this past year and what we can do about it here in our little corner of the world, called Humboldt County.

The first two weeks of our campaign we'll be looking at privilege, prejudice and power and what happens if we treat fellow citizens as the "other."

The third week, we'll be pulling it all together, celebrating allies and talking with organizations that can make a difference.

Once again, we'll culminate this three week campaign with a Healing Breakfast, Friday Morning, November 20 at the Eureka Woman's Club.  This will be free and open to the public.

This years campaign is, once again, sponsored by Schmidbauer Building Supply.

Stop The Violence, Start the Healing

All of the interviews will be archived here as they air so you can listen and share when it's best for you.

WEEK ONE: TOPIC: Prejudice and Privilege: The Violence of “Other-ism”

11-3 Sheri Johnson: My co-host for the past 20 years and I go over in detail this year's campaign.

Dr. Eichstedt's areas of research include Sociology of Race and Ethnicity and Critical White Studies.  Today's conversation mainly focused on White Privilege and what that means and how in manifests itself in daily life. 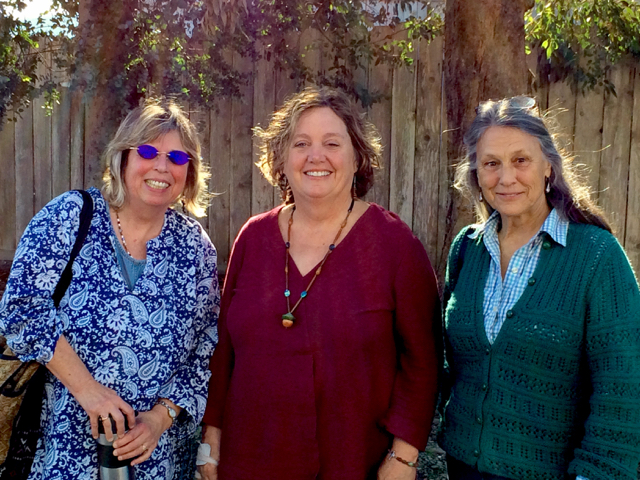 11-6 Call-In Panel Discussion on Prejudice, Privilege and The Violence of Other-isim. My Co-Host, Sheri Johnson and I met with Paula Arrowsmith Jones of the North Coast Rape Crisis Team, Nezzie Wade, Activist with Affordable Homeless Housing Alternatives (AHHA) and Bill Damiano, Humboldt County Probation and Vice Chair of Humboldt Domestic Violence Coordinating Council. Many aspects of privilege and prejudice were discussed. A good amount of time was spent on the homeless or "houseless" people and the fact that there are virtually no legal options for so many aspects of everyday life. Pictured left to right, Sheri Johnson, Paula Arrowsmith Jones and Nezzie Wade. Bill Damiano not pictured.

WEEK TWO: TOPIC: Prejudice and Privilege: The Violence of “Other-ism”

11-10 Sam Ferguson - Sam is a good friend of mine that I've known for many years. Sam is a successful businessman in San Francisco. Sam speaks of a lifetime of experiences of being treated with suspicion while driving expensive cars or being in nice neighborhoods simply for being black. He also talked about the fact that he has ridden both sides of the fence, being a "light skinned black" and having a name that can pass for white.

11-11 Dr. Cesar Abarca - Dr. Abarca teaches in the department of Social Work at HSU. This morning we talked about the politics of prejudice, using fear of "the other" in scoring political points, making immigrants the enemy. We also talked about issues of the immigrant community and the rising population of the Latino community on the campus of HSU, now at 39%. We also touched on the upcoming "Nourishing Roots in Resistance Gathering" coming up November 13th and 14th.

11-12 Dr. Loren Cannon - Dr. Cannon Teaches in Department of Philosophy at Humboldt State University. We continued our conversation on Prejudice and the Violence of Other-ism. Dr. Cannon, a transgender man speaks frankly on the otherisation of the trans community and the fear tactics used to do it. A shocking 70% of transgender individuals have experienced some form of harassment. 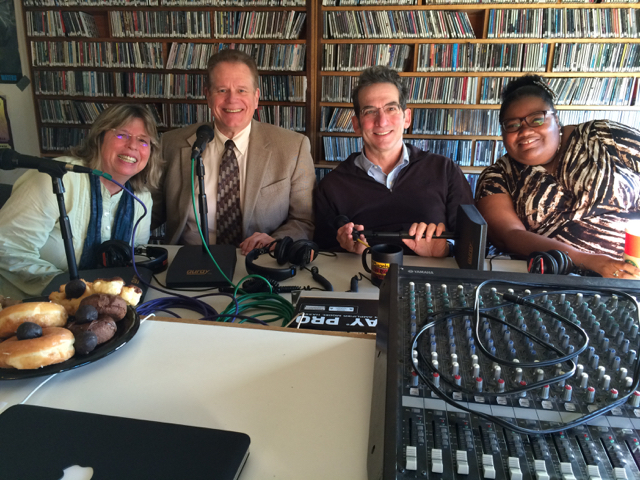 11-13 Call-In Panel Discussion on Prejudice, Privilege and The Violence of Other-isim. My Co-host Sheri Johnson and I had a riveting 2 hour discussion on this topic with Chryste Johnson, Redwood Coast Regional Center; Dr. Garry Eagles, Superintendent of Schools in Humboldt County; and Dr. Gregg Gold, HSU Professor teaching The Psychology of Prejudice.

11-17 Professor Maxwell Schnurer - Today Maxwell and I talked about the event that took place just days ago on the Arcata Plaza in which 2 black women were accosted by 2 white men in a truck. Bottles were thrown and words were said. And although pursued, the women thankfully flead to safety. We also talked more in general about how opinions change over time. And in keeping with this weeks topic, what it takes to be an ally.

11-18 Marianne Pennekamp - She is a retired Social Worker in Oakland City Schools where she served for 30 years. Marianne and her family fled Europe during the Holocaust. She also received her PhD from Cal Berkeley. We spoke today we talked about how important school Allies can be to students and their families. We also talked about how all of us can become allies.

11-19 Dr. Rene Byrd - Dr. Byrd teaches in the Sociology department at HSU. She has done a lot of research into the steep rise in the rate of incarceration in our country and the disproportionate number of people of color who are locked up. Byrd describes herself as a Prison Abolitionist. We also discussed the Black Lives Matter Movement and the racist incident that took place on the Arcata Plaza last weekend among many other topics. 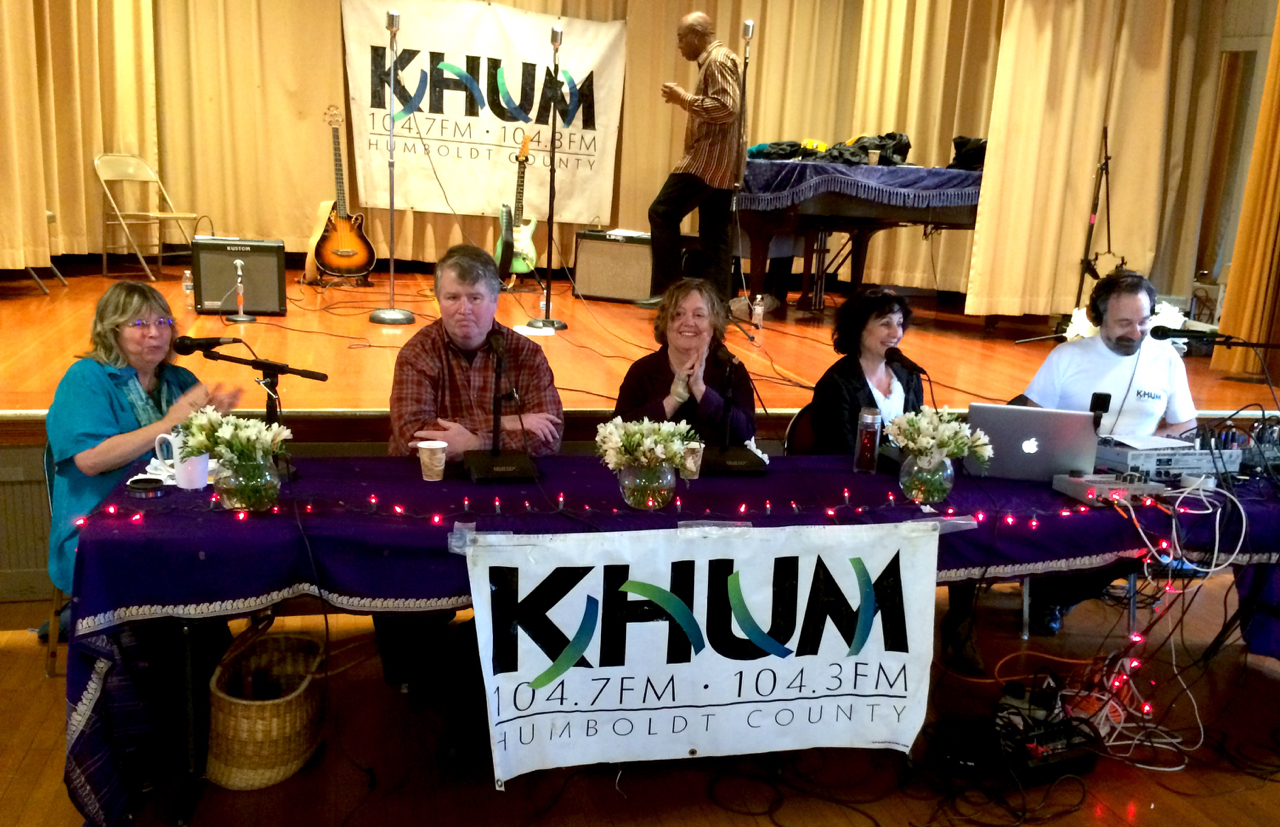 It was a wonderful morning at the Eureka Woman's Club for the culminating event for KHUM's 20th Stop the Violence, Start the Healing campaign. The theme for the this final week of the 3 week campaign was Being and Celebrating Allies. That rang true today. Aside from myself, our panel consisted of my co-host for the past 20 campaigns, Sheri Johnson, Director of Field Education in the Department of Social Work at HSU, and board member of the Humboldt County Domestic Violence Coordinating Council; Patrick Cleary, Executive Director of Humboldt Area Foundation; Paula Arrowsmith Jones of the North Coast Rape Crisis Team; and for the first time, My wife Amy Berkowitz representing CR Adult Education. 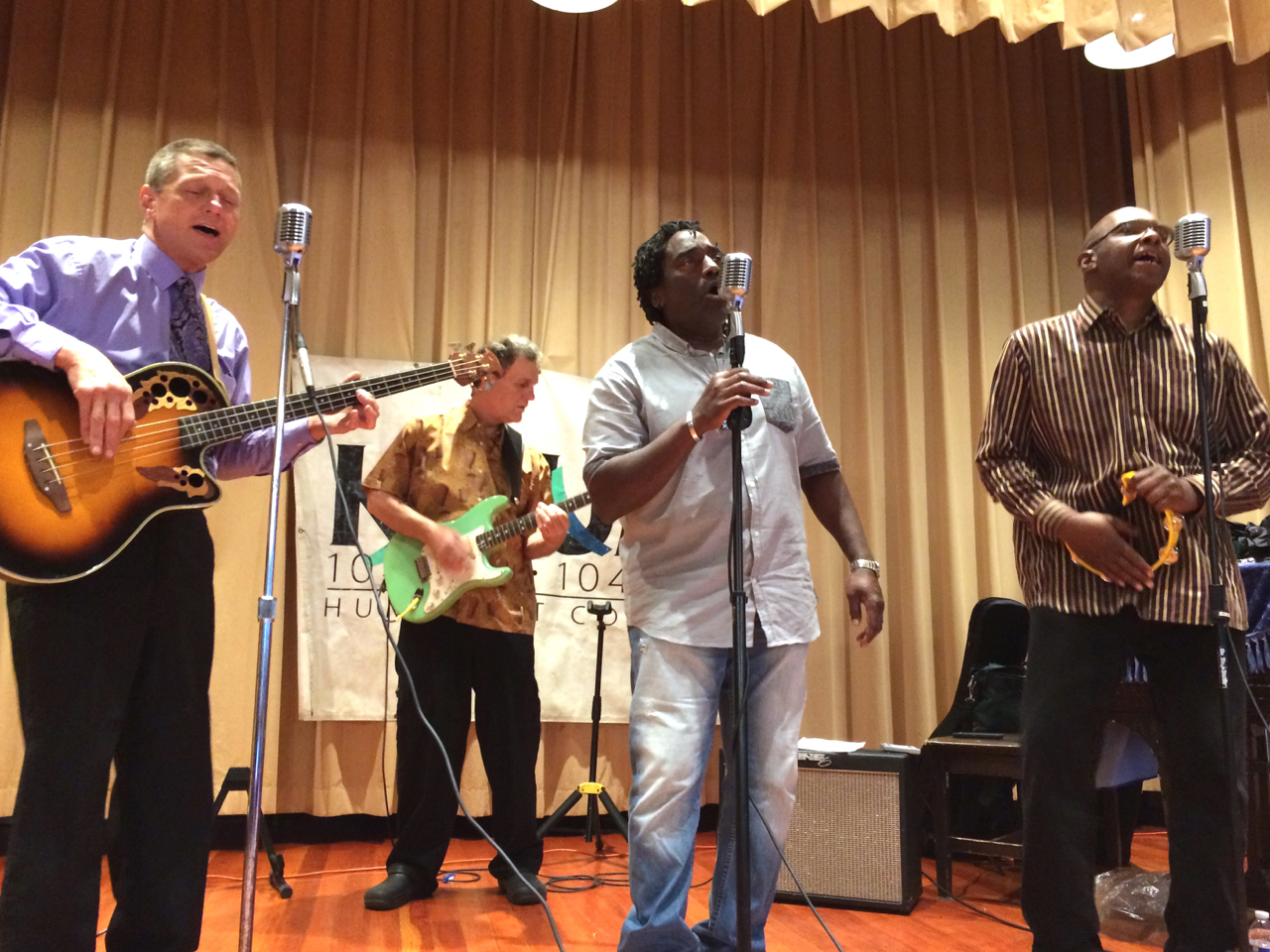 We also had Several Sets of Music from the True Gospel Singers, whose sweet harmonies warmed the room. 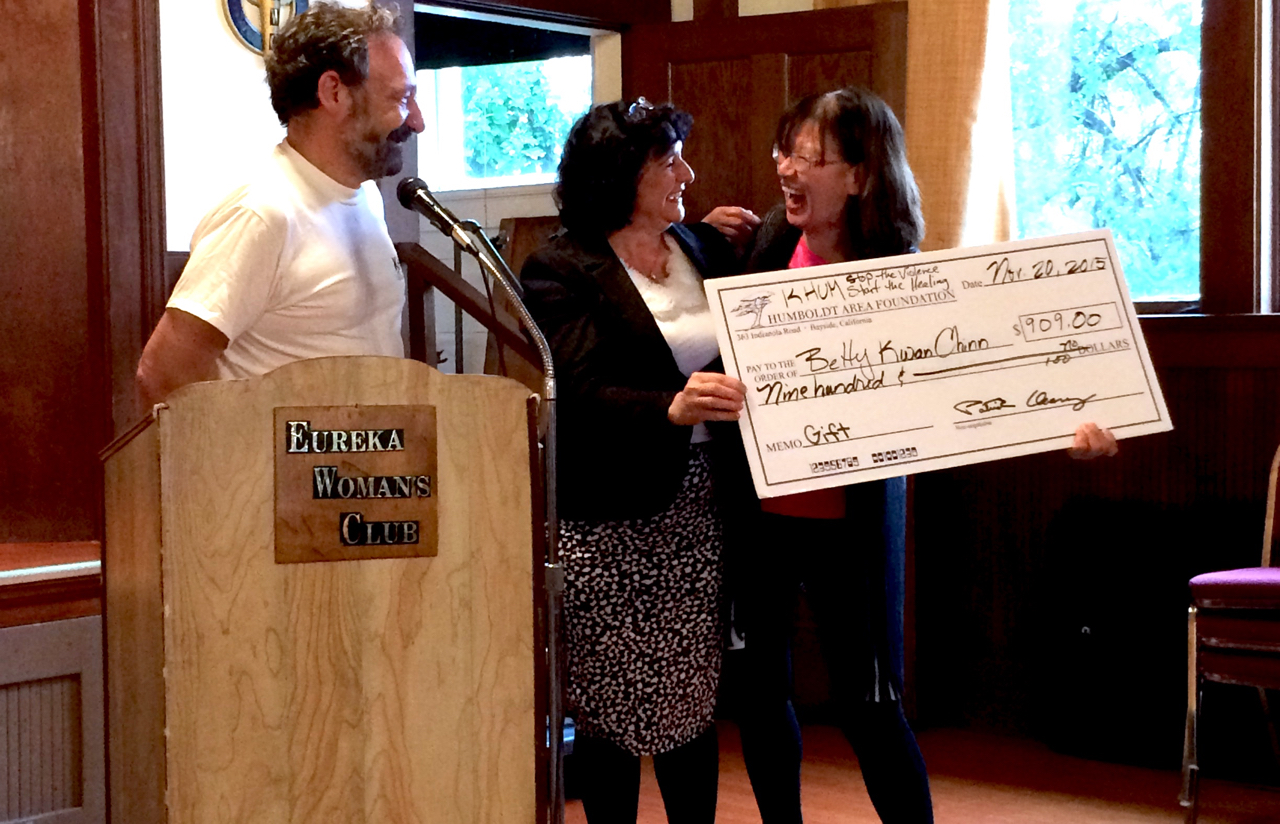 Betty Chinn was our Keynote Speaker. She told her amazing story and how what she does for the community helps her heal every day from the pain as scars of her past. Betty also received this year's Stop the Violence Funds for the continuing great work she does in our community. She received a check in the amount of $909.00 from the Stop the Violence fund, managed by the Humboldt Area Foundation. 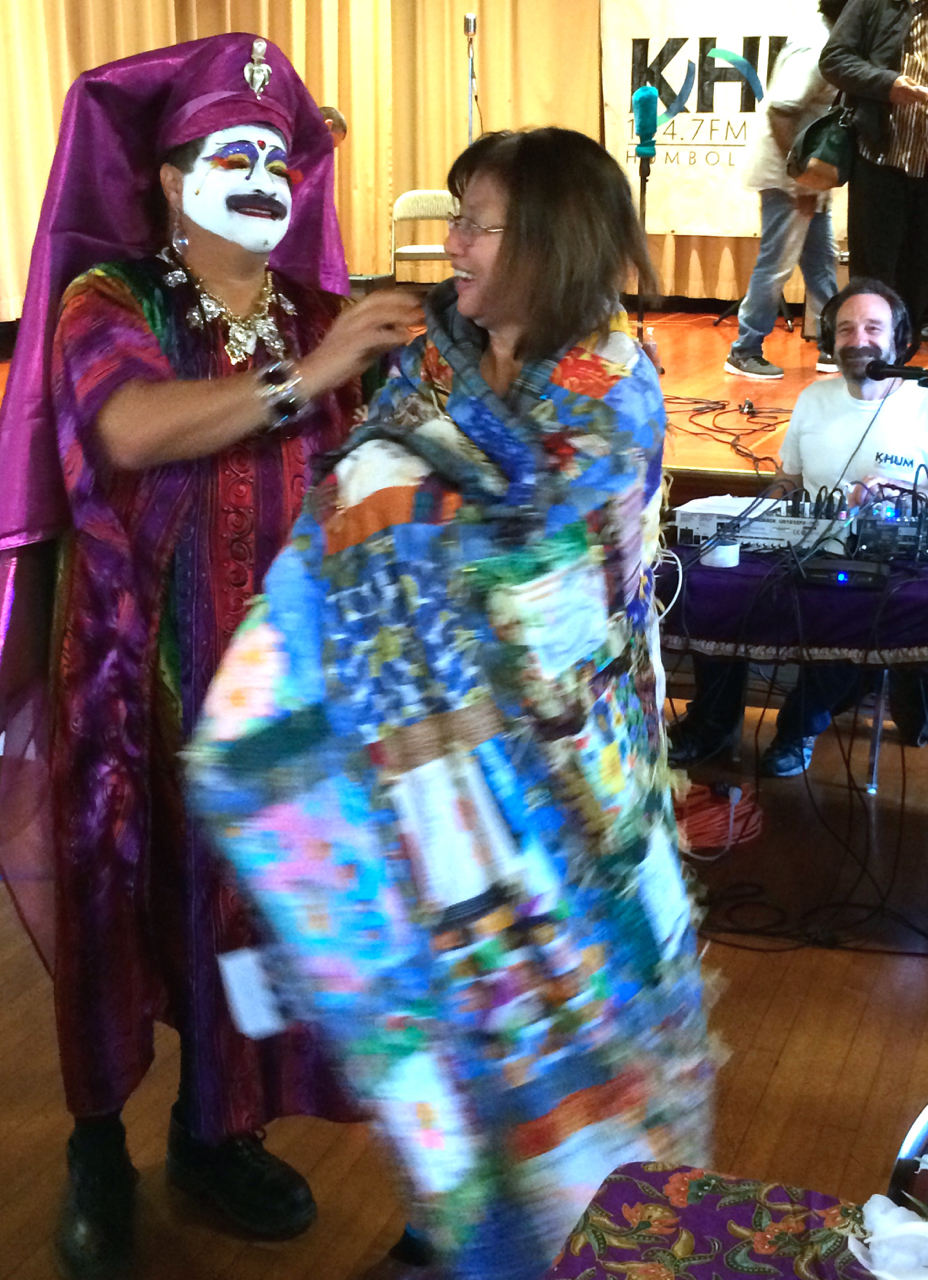 In addition to the check, Oceana Madrone awarded this year's Healing quilt, made from squares made at previous Healing Breakfasts, to Betty. She quickly wrapped herself in the quit presented by Sister Juana of the Sisters of Perpetual Indulgence. 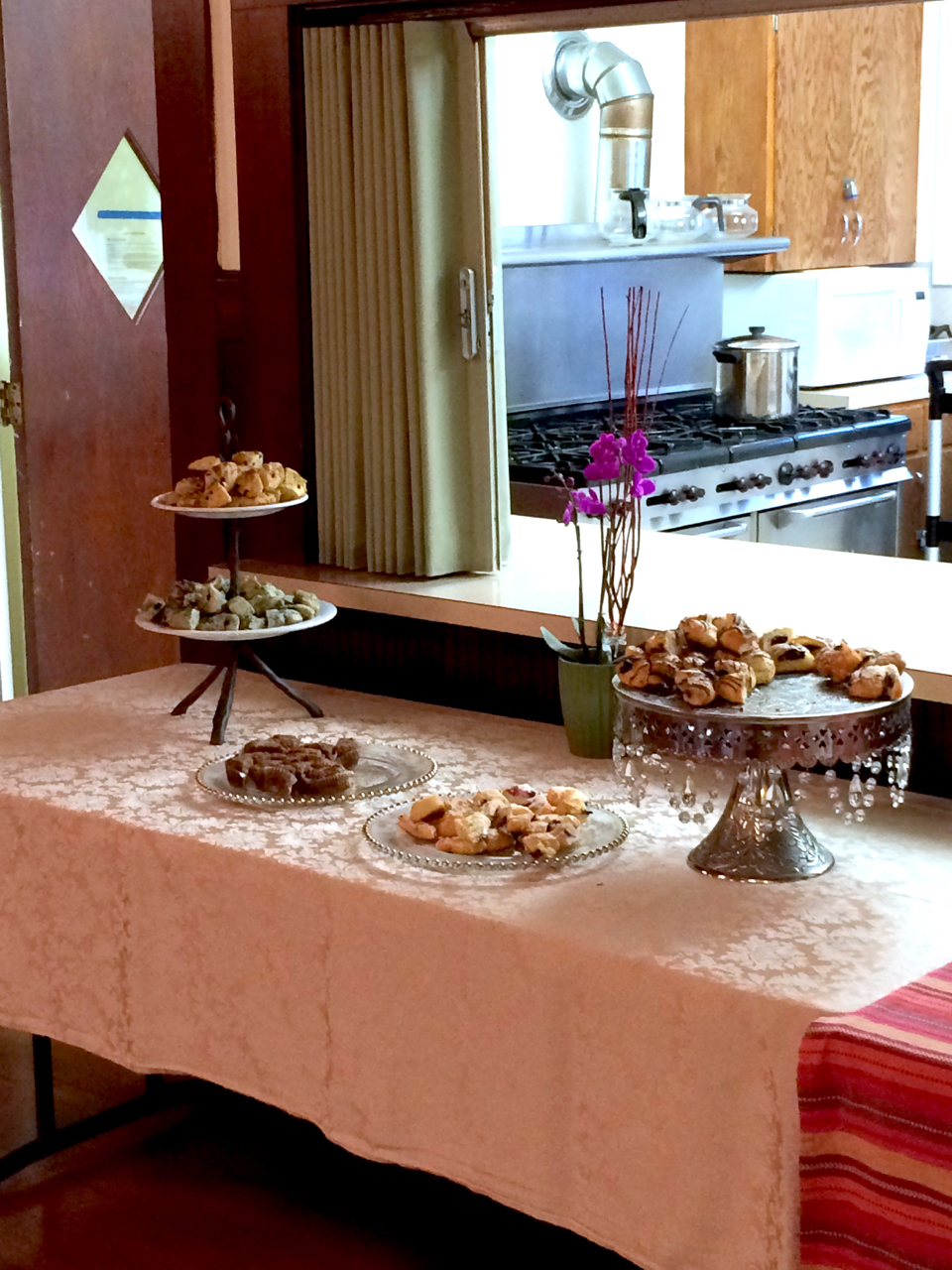 The day started with yummy pastries provided by Ramone's Bakery and KHUM Blend Coffee, from Signature Coffee. The room was made beautiful by flowers provided by Sun Valley Floral Farm. The entire Healing Breakfast was recorded and can be downloaded or streamed from here. Thank you to everyone for attending, and thank you to everyone who volunteered their time to make it all possible.