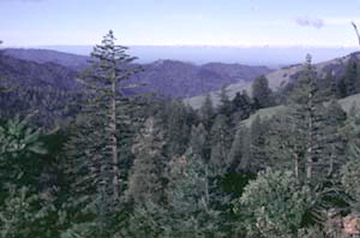 This morning I spoke with Sawyer who filled me in on efforts by local environmental activists to protect the Old Growth stand of Douglas Fir up on Rainbow Ridge. Ever since Maxxam left and Humboldt Redwood Company took possession, there has been a 20 year understanding that the stand was off limits.

However, with a large contract from Home Depot for a large amount of Doug Fir lumber, HRC has decided to log the ridge and cash in. Sawyer reports that HRC had hired a paramilitary force to remove the protestors and open the blockade. This group is apparently armed with assault rifles and attack dogs. There is a rally today at the Monument Gate above Rio Del.

This is shaping up to be the biggest showdown since the old timber wars of 20+ years ago. The Fisher Family, who owns Humboldt Redwood Company, also owns The Gap, Old Navy, Banana Republic and the Oakland A's. Sawyer suggests that anyone who apposes this aggressive timber harvest to contact one of these stores to let them know you will be boycotting them until Rainbow Ridge is once again protected.